The Pyramid Hill zone consists of two northwest trending sub-parallel vein zones located approximately 500m apart, called the Pyramid Hill (“PH”) and the “M28” zones. Each zone hosts several 1- to 5-meter-wide quartz veins. At the PH zone, the veins dip steeply to the northeast and are surrounded by a prominent alteration zone with an approximate 20m wide zone of stockwork veining and brecciation, and at M28, the veins dip shallowly to the west.

Recent mapping has extended both vein systems by 1.5km to the southeast, extending them both to nearly 3.5km in length. Initial results received from 96 samples submitted for analysis in December, returning grades up to 6.2 g/t Au and 273 g/t Ag; significant results are summarized in table 1 below: 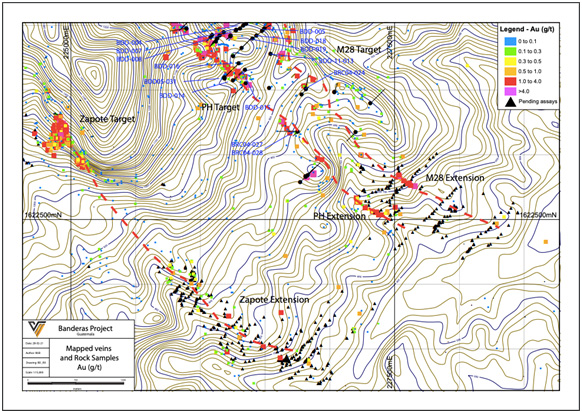 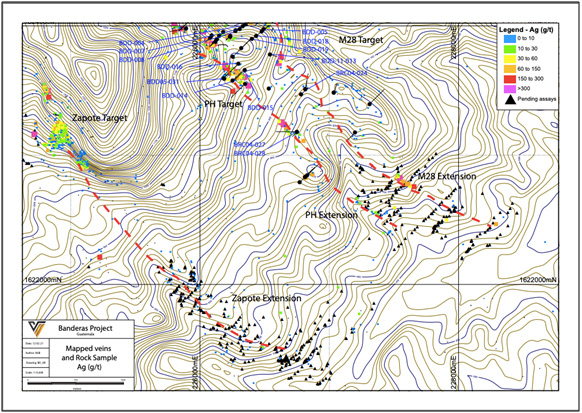 Historically, over 40 shallow drill-holes have explored the PH and M28 systems and returned broad zones of low-grade gold/silver mineralization in both mineralized corridors including:

Simon Ridgway, Volcanic’ s CEO stated, “The results of the recently completed mapping and sampling program have extended the PH and M28 vein systems by a further 1km to the southeast beyond the historic drilling. Of note, the zones appear to be trending together and importantly we are starting to see elevated mercury, arsenic and antimony indicating that the historic drilling appears to have explored the upper part of the epithermal system above the potential bonanza gold-silver zone. These new anomalies represent significant potential for discovery at Pyramid Hill. We are also very excited about the Zapote system, where a robust 1.5km long epithermal system has been outlined and which is completely undrilled. Drill permits have been submitted to the Ministry of Environment and Natural Resources for these targets and we are optimistic that we will be able to test them later in the year following the completion of the drilling at the Holly Project.”

Long sections of previous drilling and surface sampling at PH and M28 can be found on the Volcanic Gold website.

The Zapote Zone is located 1,500m to the west of the Pyramid Hill zone on the opposite side of a large Dacitic Dome that creates a broad barren area. The mineralized zone at Zapote lies at the contact of the Dacite flow rocks and the intruded Andesite/Rhyolite host rocks. Historic rock chip sampling over an area 150m wide along 800m of this contact has returned strongly anomalous gold/silver mineralization. At the southeast end the zone disappears under an extensive area of large Dacite boulders. This target has never been drill tested.

Recent sampling has picked up the trend 850m to the southeast, directly on strike with the original Zapote trend. A group of 38 samples were collected from the Zapote South vein system extending it 1.5km to the southeast, returning values up to 2.7 g/t Au and 14.7 g/t Ag

Follow-up Exploration
A geophysics program is being planned to be conducted in March and April to help guide proposed drill programs for both the Pyramid Hill and the Zapote mineralized systems. Volcanic’s geologists have collected a further 484 samples from these target areas and the results are pending.

Technical Information
The technical contents of this press release have been reviewed by Matthew Booth, a Qualified Person for the purposes of NI 43-101. Mr. Booth has over 17 years of mineral exploration experience and is a Qualified Person member of the American Institute of Professional Geologists (CPG 12044).

Volcanic brings together an experienced and successful mining, exploration and capital markets team focused on building multi-million-ounce gold and silver resources in underexplored countries. Through the strategic acquisition of mineral properties with demonstrated potential for hosting gold and silver resources, and by undertaking effective exploration and drill programs, Volcanic intends to become a leading gold-silver company.

Certain statements contained in this news release constitute forward-looking statements within the meaning of Canadian securities legislation. All statements included herein, other than statements of historical fact, are forward- looking statements and include, without limitation, statements about the Company’s plans for exploration work in Guatemala. Often, but not always, these forward looking statements can be identified by the use of words such as “estimate”, “estimates”, “estimated”, “potential”, “open”, “future”, “assumed”, “projected”, “used”, “detailed”, “has been”, “gain”, “upgraded”, “offset”, “limited”, “contained”, “reflecting”, “containing”, “remaining”, “to be”, “periodically”, or statements that events, “could” or “should” occur or be achieved and similar expressions, including negative variations.

Forward-looking statements involve known and unknown risks, uncertainties and other factors which may cause the actual results, performance or achievements of the Company to be materially different from any results, performance or achievements expressed or implied by forward-looking statements. Such uncertainties and factors include, among others, whether the Company’s planned exploration work will be proceed as intended; changes in general economic conditions and financial markets; the Company or any joint venture partner not having the financial ability to meet its exploration and development goals; risks associated with the results of exploration and development activities, estimation of mineral resources and the geology, grade and continuity of mineral deposits; unanticipated costs and expenses; and such other risks detailed from time to time in the Company’s quarterly and annual filings with securities regulators and available under the Company’s profile on SEDAR at www.sedar.com. Although the Company has attempted to identify important factors that could cause actual actions, events or results to differ materially from those described in forward-looking statements, there may be other factors that cause actions, events or results to differ from those anticipated, estimated or intended.