February 9, 2021 – Vancouver, British Columbia – Volcanic Gold Mines Inc. (TSXV: VG) is pleased to announce that ongoing exploration work at the Holly project in Guatemala is defining several exciting targets. Volcanic’s exploration teams have been ground proofing the extensive historic data collected by Radius Gold since initial discovery in 2002, and the reprocessing and reinterpretation of the geophysical data acquired at Holly has led to well defined drill targets. Drill permits are expected to be received in Febuary with drilling planned to commence before month end.

The Holly property straddles the regional-scale Jocotan Fault which forms part of the Motagua Suture Zone, a 400km long and up to 80km wide deformation zone that separates the North American and Caribbean tectonic plates.

At Holly, the Jocotan Fault forms a well defined east-west trending ridge, separating older metamorphosed, foliated sedimentary rocks to the north from much younger volcanic rocks to the south. Exploration programs conducted by Radius Gold outlined a number of very high grade silver/gold occurrences along the trace of the ridge. Initial trenching and drilling of these targets returned excellent results, however no follow-up work was done on the extension of these mineralized zones along the ridge and to the north. These zones remain open for resource definition. (see Figure 1 below) 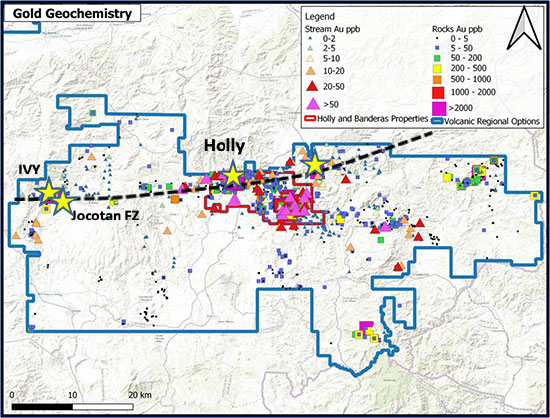 Volcanic gold reprocessed the data from IP surveys conducted on the property in 2002 and 2008, and the updated models have improved the data quality. Ground proofing of these targets has defined several exciting drill ready targets:

Simon Ridgway, Volcanic’s CEO, commented: “Our IP modelling has revealed compelling drill targets at Holly. Three out of four historic drill holes completed at Holly testing the high-grade veins returned great gold and silver mineralized intervals, and we’ve always believed that the Jocotan Fault has the potential to host a significant mineralized system. No drill holes have tested the structure at depth, and the coincident restivity high and soil gold geochemistry is set to be the focus of drilling at Holly.

Volcanic’s geologists have initiated an extensive mapping and sampling program along the 60km strike length of the Jocotan Fault zone that occurs within the properties that Volcanic has optioned from Radius Gold Inc. Several other mineralized zones have been identified by Radius’ historic sampling programs.”

The technical contents of this press release have been reviewed by Matthew Booth, a Qualified Person for the purposes of NI 43-101. Mr. Booth has over 17 years of mineral exploration experience and is a Qualified Person member of the American Institute of Professional Geologists (CPG 12044).

Volcanic brings together an experienced and successful mining, exploration and capital markets team focused on building multi-million-ounce gold and silver resources in underexplored countries. Through the strategic acquisition of mineral properties with demonstrated potential for hosting gold and silver resources, and by undertaking effective exploration and drill programs, Volcanic intends to become a leading gold-silver company.

Certain statements contained in this news release constitute forward-looking statements within the meaning of Canadian securities legislation. All statements included herein, other than statements of historical fact, are forward- looking statements and include, without limitation, statements about the Company’s plans for exploration work in Guatemala. Often, but not always, these forward looking statements can be identified by the use of words such as “estimate”, “estimates”, “estimated”, “potential”, “open”, “future”, “assumed”, “projected”, “used”, “detailed”, “has been”, “gain”, “upgraded”, “offset”, “limited”, “contained”, “reflecting”, “containing”, “remaining”, “to be”, “periodically”, or statements that events, “could” or “should” occur or be achieved and similar expressions, including negative variations.

Forward-looking statements involve known and unknown risks, uncertainties and other factors which may cause the actual results, performance or achievements of the Company to be materially different from any results, performance or achievements expressed or implied by forward-looking statements. Such uncertainties and factors include, among others, whether the Company’s planned exploration work will be proceed as intended; changes in general economic conditions and financial markets; the Company or any joint venture partner not having the financial ability to meet its exploration and development goals; risks associated with the results of exploration and development activities, estimation of mineral resources and the geology, grade and continuity of mineral deposits; unanticipated costs and expenses; and such other risks detailed from time to time in the Company’s quarterly and annual filings with securities regulators and available under the Company’s profile on SEDAR at www.sedar.com. Although the Company has attempted to identify important factors that could cause actual actions, events or results to differ materially from those described in forward-looking statements, there may be other factors that cause actions, events or results to differ from those anticipated, estimated or intended.