October 12, 2017 – Vancouver, British Columbia – Volcanic Gold Mines Inc. (“Volcanic”) (TSXV: VG) is pleased to report further results of close-spaced air core (“AC”) drilling at its Mandiana Project in Guinea. The drilling, immediately adjacent to Volcanic’s existing Inferred Mineral Resource (“Resource”) at Yagbelen (as reported on November 6, 2016), now shows the mineralized target area surrounding and along strike from the Resource to be over 3km in length, up to 500m in width and consisting of multiple parallel zones, as shown in red on Figures 1 and 2. This mineralized area is considerably larger than the surface projection of the Resource (1km by up to 200m; shown in magenta on Figure 1), thereby indicating the potential to significantly increase this Resource. Note that the maximum downhole depth from collar of AC drilling is 40m for the entire Yagbelen program. AC results therefore likely represent the surface expression of underlying mineralization.

Highlights of the AC drilling program are as follows:

Air core drilling is a technique that allows rapid, low-cost exploration beneath cover with the objective of providing targeting information for further mineralization. It has been used very effectively by Volcanic in the identification and refinement of resource targets for subsequent reverse circulation (“RC”) and diamond drilling. Volcanic’s near- term plan is to conduct such drilling within the target area identified by air core drilling, with the objective of defining an expanded resource.

Drill chip sampling at Mandiana followed a standardized protocol to ensure the collection of representative and unbiased quantities of material from each sample. Samples were collected from Volcanic’s Mandiana field operations by SGS Mineral Services of Bamako, Mali, and were transported directly to the assay facilities thereof, at which they were analysed for gold by means of fire assay, in accordance with analytical method FAA505. In this procedure, a 50g sample is fused with a litharge based flux; the resulting prill is then dissolved in aqua regia, from which gold content is then determined by flame AAS at a detection Limit 0.01 ppm. Volcanic routinely inserted appropriate standards and blanks into its sample stream at Mandiana, and additionally collected regular field duplicate samples.

Certain statements contained in this news release constitute forward-looking statements within the meaning of Canadian securities legislation. All statements included herein, other than statements of historical fact, are forward-looking statements and include, without limitation, statements about the Company’s exploration work at the Mandiana Project. Often, but not always, these forward looking statements can be identified by the use of words such as “estimate”, “estimates”, “estimated”, “potential”, “open”, “future”, “assumed”, “projected”, “used”, “detailed”, “has been”, “gain”, “upgraded”, “offset”, “limited”, “contained”, “reflecting”, “containing”, “remaining”, “to be”, “periodically”, or statements that events, “could” or “should” occur or be achieved and similar expressions, including negative variations.

Forward-looking statements involve known and unknown risks, uncertainties and other factors which may cause the actual results, performance or achievements of the Company to be materially different from any results, performance or achievements expressed or implied by forward-looking statements. Such uncertainties and factors include, among others, whether the Company’s exploration work on the Mandiana Project will proceed as intended; changes in general economic conditions and financial markets; the Company or any joint venture partner not having the financial ability to meet its exploration and development goals; risks associated with the results of exploration and development activities, estimation of mineral resources and the geology, grade and continuity of mineral deposits; unanticipated costs and expenses; and such other risks detailed from time to time in the Company’s quarterly and annual filings with securities regulators and available under the Company’s profile on SEDAR at www.sedar.com. Although the Company has attempted to identify important factors that could cause actual actions, events or results to differ materially from those described in forward-looking statements, there may be other factors that cause actions, events or results to differ from those anticipated, estimated or intended. 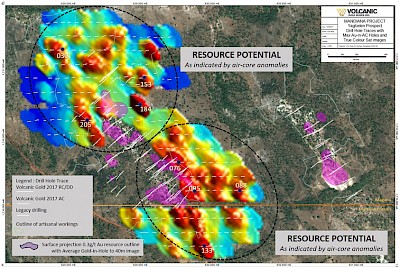